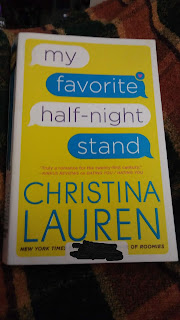 I fell in love with the writing duo of Christina Lauren last year after reading Dating You/Hating You. The writing and plot were so sharp and fast-paced, and the chemistry between Carter and Evie was magnetic (and it's a book set in Hollywood, so you know I'm down for that!), so I was excited to find two of their books on the library's New Fiction shelf this week. My Favorite Half-Night Stand didn't disappoint one bit.

Millie's life isn't perfect- her mom died when she was young, leaving her family fractured and Millie unable to open up about her pain; her father has been newly diagnosed with Parkinson's and she can't deal- but it helps that she has the most amazing group of friends. Guy friends: Ed, Chris, Alex...and Reid. Reid's the guy she considers her best friend; things have always been just a little different with him, a little extra. When the five of them realize they need dates for their university's upcoming black tie gala, the perpetually single workaholic friends make a pact to join a dating app, but that night, Millie and Reid burn it down in bed together. No biggie, it's just a one-time thing...right?

When Reid begins to talk to women on the app and Millie gets nothing but dick pics and lascivious come-ons, she creates a second, secret profile...and matches with Reid. She's sure he'll recognize their private jokes in the message she writes, but when he doesn't, she finds herself opening up to him in a way she can't in real time. Their repeated steamy encounters only complicate the situation, especially when Reid's still chatting with Daisy, a gorgeous blond, and Cat, Millie's fake profile. When things come to a head, Millie needs to decide what she truly wants...and Reid will have to decide if he can ever trust his best friend again.

I loved this. Lying about identity always makes me uncomfortable in romance novels, but Millie's character was so genuine and the chemistry, not only between her and Reid but among the friend group, was enough to make up for my unease. Each character has such a distinct personality and way of interacting with the others that made the group scenes an absolute delight to read; they had me wishing I had my own bad pun-cracking, loud belching guy friend group to wipe the floor with in Friday night Monopoly games, and the group chat scenes add an extra bit of modern day fun. Nothing about Reid and Millie together seemed forced, and I really enjoyed how each morning after situation contained no awkwardness, just an easy back-to-normal continuation of the way things had always been between them. Their witty banter had me laughing out loud several times (to the point where my husband asked if I was okay from the other room).

Christina Lauren is (are? What verb form does what looks like a singular person who is actually a writing team take???) a master of contemporary romantic comedy, and My Favorite Half-Night Stand slammed it way out of the park for me. I've got Josh and Hazel's Guide to Not Dating coming up next and I can't wait to dive in. 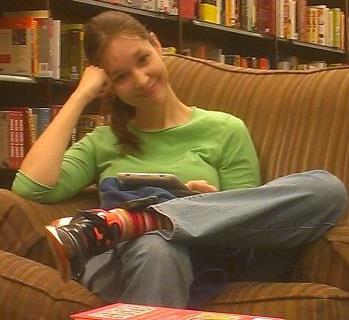